Covid-19: regularly wash your hands, keep your distances, wear a face mask in public spaces and stay home as much as possible.
info at WHO and latest stats on Worldometer. Stay alive!
Skip to content

Yep, no anime girl on the box. The illustration is pretty straightforward: the product itself and some description.

And:  “enjoy your hansfree life”.

A good point for the directions on the box. The setup isn’t complicated, but that helps a bit. P for “power”, S for “suction”, and R for … “release” ? 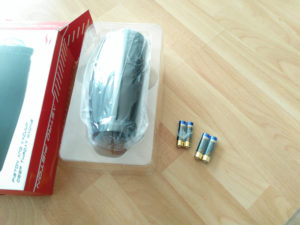 Inside, the toy itself in wrap inside plastic tray, and 4 AA batteries from TOSHIBA to get started right away. By the amount of batteries, you can tell the toy draws quite some current. I guess they avoided giving it a build-in USB-rechargeable battery because of the costs and difficulty to ship by airmail in some countries for security reasons. 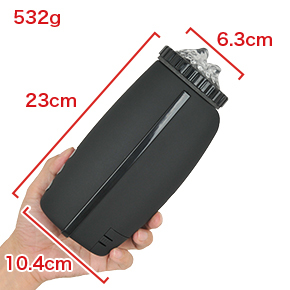 The toy itself is made in hard black plastic, and a plastic container that can slide in and out from the main body. That container holds a penis sleeve with a mouth-shaped opening, secured by a plastic ring. 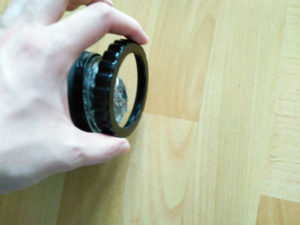 The batteries are held in a little tray at the bottom: 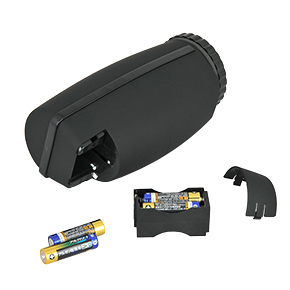 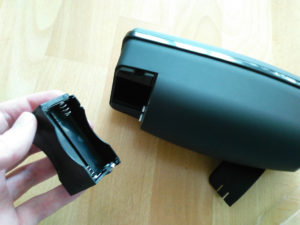 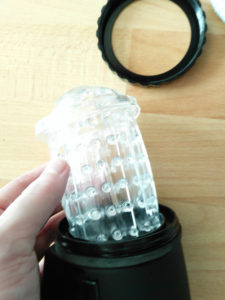 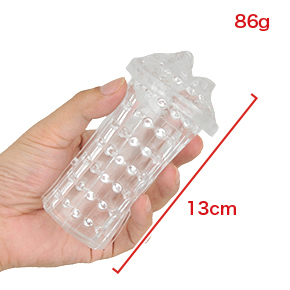 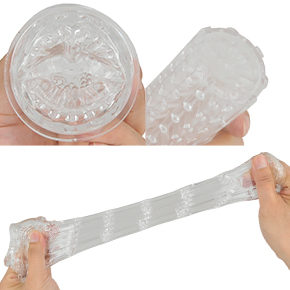 It’s material has a rather weak smell but feels quite “oily”. It’s flexible, even if that’s hardly relevant for that toy. Inside, it has just lots of little spikes meant to tickle your penis up and down. Is it meant to represent the taste buds of the tongue ? The mouth shape of the opening features two lips. 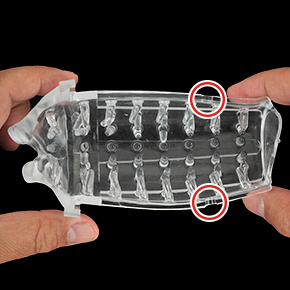 The sleeve features two holes in it’s wall: that’s from where the toy pumps the air out/in. … and where the sleeve leaks lubricant/body fluids into the sleeve container, which can’t be unmounted for cleaning: needs wipes. 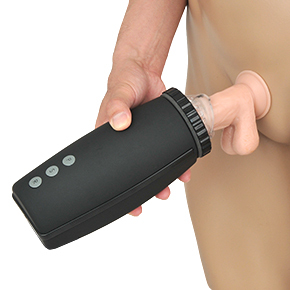 At first, it’s like any onahole: put your dick in. Westerners will notice that they reach bottom quite fast, yeah you can tell by the size of the sleeve that it’s rather a glans-tickler to them than a full-penis stroker. 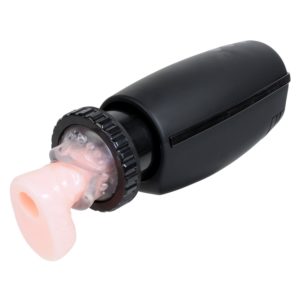 That’s what happens, in slowmo:

My first try was a fiasco: the toy was either just pushing my dick down, or using it to “bounce” up and down. No stroking sensation on my dick, so no pleasure.

I tried another lubricant, and got slightly better results: you need to use a very slick and thin water-based lubricant. A lube like Onatsuyu or Peace’s should do. But more tweaking was needed, so I grabbed my scissors. I mark my cuts in red:

While I don’t that much of a thick dick, those cuts really helped the sleeve to slide around my glans and down some part of my shaft. It’s pretty much like the sensation when making a ring with your thumb and finger, then sliding it down your dick. While this helped for the stroking (thus making me able to reach orgasm eventually), this no longer made the opening air-tight. So the vacuum and release functions became useless (aside bringing a “little breeze” sensation). Not that it did bring anything really noteworthy aside feeling a little bit like “balloon-penis”..

I think a more generic opening like Ju-C Puti‘s would have been better.

Oh uh.. the spikes inside..  Westerners may experience something like that:

The spikes don’t glide along the penis: their tip remains at the same contact point on the penis, and the spikes just “wobble” back and forth with the sleeve’s movement. Sad.

A better engineering idea would have been a spiral:

The spiral would wrap the penis and provide much more surface contact that wouldn’t move around much with the sleeve movement, effectively mimicking a tongue (and teeth ?) stimulating the penis. Hell, a structure like Bangee Shake would be mind-blowing !

Brace yourself for questions from your family, room mates, neighbors, city employees, stock market analysts, mermaids and aliens from another galaxy. During usage, this toy makes a sound close to the ticking of a metronome and the motor+plastic parts sound of an electric toy train from the previous century or some kind of self-moving plastic toy animal or otherwise quickly annoying electric thing like a Furby.

Unscrew the ring, take out the sleeve, wash it in clear water + soap. The sleeve can be turned inside-out for complete cleaning, no other part should be put under water. It’s also a good idea to clean the sleeve-container with just a wet wipe (due to the two holes in the sleeve possibly leaking stuff). And the outside of the toy too if your hand switched between penis and toy.

I must say, we’re still quite far away from sexbots. Astro Piston suffers some major engineering issues, mostly due to the maker’s efforts to reduce the price. No rechargeable built-in battery, low-quality sleeve, Engrish text, very annoying noise, inefficient opening, …

Yeah sure I eventually always reached orgasm, and when it happens it’s not the sharp pleasure spike you’d experience from an onahole, rather a.. “slow-uphill orgasm” that lasts a bit longer, but doesn’t feel as “exploding” as male orgasm usually is. However it easily makes a foamy mess.

That’s sad. “Piston”-type toys are rare, and somehow attaching a generic onahole or Fleshlight to a reciprocating saw seems more cost efficient.. I wonder if that technology is any useful to advance to sexbot tech: the insertable part would remain fixed, the robot just mimicking human body movement (for example using it’s legs in case of “cowgirl” position).

+ cheap
+ it moves indeed
+ that was worth an attempt maybe

European otaku exploring Japan's cutest clothing and most amazing anime sex toys for fun, since 2011. View all posts by Akai